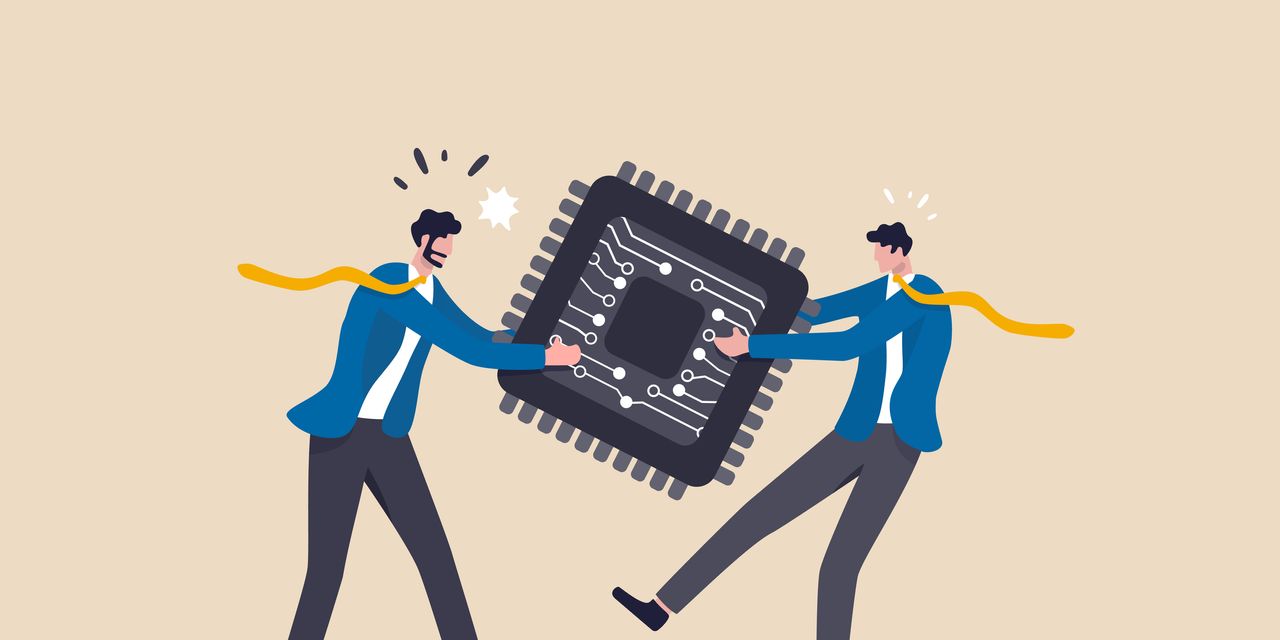 Just about every investor is aware that a shortage of semiconductors and related equipment, including microprocessors and chips, are in short supply while demand is high. And yet the stocks of this critical group trade relatively low to the broader stock market.

Below is a list of favorite semiconductor stocks among Wall Street analysts, based on a deep dive into the holdings of five exchange traded funds focused on the industry.

The chip shortage isn’t the whole story — innovation and new business have lit fires under some of the best-known semiconductor companies. Shares of Nvidia Corp.
NVDA
were up 49% from the end of September through Nov. 8, while Advanced Micro Devices Inc.
AMD
was up 46%.

The PHLX Semiconductor Index
SOX
is considered the benchmark index for chip makers and companies that make equipment and systems used by them. It is tracked by the iShares Semiconductor ETF
SOXX,
which holds all 30 stocks in the index and is weighted by market capitalization.

This means Nvidia is the top holding, making up 9.7% of the portfolio, and the top five investments, which also include Broadcom Inc.
AVGO,
Intel Corp.
INTC,
Qualcomm Inc.
QCOM
and Texas Instruments Inc.
TXN,
account for 35.3% of the ETF’s assets. The sixth-ranked company, AMD, is 4.5% of the portfolio.

SOXX trades at a forward price-to-earnings ratio of 20.9, based on consensus estimates among analysts polled by FactSet, while the forward P/E for the S&P 500 Index
SPX
is 21.7. It’s not unusual for the semiconductors to trade at a discount. However, it is unusual for there to be a broad shortage of the industry’s products.

Here’s how SOXX has traded relative to the S&P 500 over the past 10 years:

Underlining the discount for the semiconductor group is the expectation that the group will increase its sales and earnings much more quickly over the next two years.

Here are expected compound annual growth rates (CAGR) for sales and earnings per share through 2023, based on weighted consensus estimates among analysts polled by FactSet:

To look beyond the SOXX 30, we reviewed five ETFs that follow different approaches, to come up with a broader initial list of stocks:

Together, removing duplicates, the five ETFs hold 65 stocks, with 62 covered by at least five analysts covered by FactSet.

Among the 62 companies, 25 have “buy” or equivalent ratings among at least 75% of the analysts. Only 10 of them are held by SOXX and only three (including Nvidia) are held by all five ETFs. Here they are, ranked by the implied 12-month upside, based on consensus price targets:

A screen can only be the beginning of your research, if you wish to hold individual stocks rather than make broad investments using ETFs or mutual funds. Click on the tickers for more about each company. Click here for Tomi Kilgore’s detailed guide to the wealth of information for free on the MarketWatch quote page.

As you can see on the table, some of the stocks, despite being so well-regarded, have gotten ahead of their one-year price targets. Nvidia is a good example. Why do so many analysts rate it a buy, despite believing the stock is overheated? Because they are looking at years beyond a 12-month target.

Don’t miss: 5 infrastructure stocks to buy now that Biden’s bill has been passed, according to Jefferies