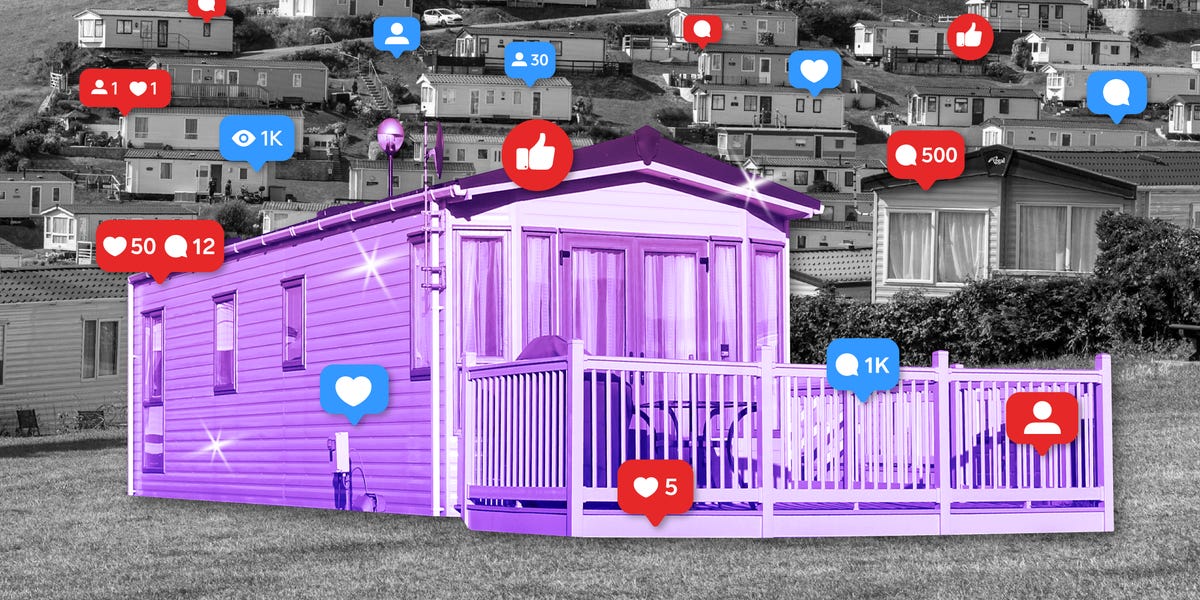 In 2014, Ryan Narus had his nose to the grindstone as a student at Wake Forest University’s prestigious MBA program, with a dream of owning his own business. Three years later, he found himself helping people move into RVs and mobile homes in La Costa, a trailer park just south of Atlanta, and collecting rent.

It was all part of a master plan — Narus bought into a general partnership of the park, the revenue from which he was reinvesting in his business. And as the park’s manager living in a no-cost double-wide, he earned another $35,000 a year, enough to satisfy him for about a year as he scaled up his investments.

Five years later, living outside the park with his family and owning equity in 26 properties, Narus is pulling in a six-figure income and helping others follow his path with the tool that helped him get where he is: the internet.

“Like any broke millennial, I had to rub together two pennies to get by,” Narus said of his early years in the business. “I self-educated with whatever resources were available to me, all of which were online.”

Narus has taken that online advice and developed a platform himself. As an influencer, he hosts the popular podcast “Mobile Home Park In Real Life,” which has been downloaded about 100,000 times and has drawn more than 5,000 followers on his LinkedIn page.

There’s been an explosion of internet interest in mobile-home investments, especially during the pandemic as Americans with means seek passive income. Legions of LinkedIn and Facebook users have joined groups aimed at sharing knowledge about success in the industry; tens of thousands of listeners tune into podcasts and YouTube videos on how to get started; and hundreds of thousands more follow Instagram influencers advocating the parks as a path to financial freedom without working too much.

On its face, the mobile-home industry has some favorable tailwinds. Some 22 million Americans, or about 6.5% of the US population, live in mobile homes, according to the Mobile Home Institute, and the value of the properties where the homes are parked is growing faster than any other real-estate asset in the country over the past several years, according to Green Street Advisors. Site rents are rising 3.5% on average each year, the MHI data shows.

The rising interest online for mobile-home parks is coming up against what is an acute problem across all kinds of US real estate: a lack of supply. Much of the existing inventory of 43,000 parks has already been hoovered up by institutional buyers such as Equity Lifestyle Properties, a firm founded by the real-estate mogul Sam Zell.

What’s more, the business is being distorted by the powers of social media. The perception of what it takes to be in the business is often far from reality for people cruising for easy profits online, Narus said.

“On the surface level it’s the story of: Make millions, have money passively, own multifamily real estate in a hidden gem no one’s talking about,” he said. “That’s just the culture, in my opinion, of social media. Click, like, comment, share, the works — I think there’s a huge market for delusions and pipe dreams.”

The obsession with mobile-home-park investments has been brewing for two decades, in real-estate markets both bullish and bearish.

Some of the earliest content creators on the topic were the investors Frank Rolfe and Dave Reynolds, a duo who say they are the fifth-largest mobile-home-park investors in the country. Their educational product has a pitch to appeal to the masses: Get in on an investment favored by billionaires like Warren Buffett.

A core item in Rolfe’s and Reynolds’ media empire is “Mobile Park 10/20 Investment System,” a book that outlines how to get started in the business. They run Mobile Home University, which charges enrollees for a detailed how-to of profiting in the industry.

“Affordable housing is the hottest arena in commercial real estate right now,” the duo says on Mobile Home University’s homepage. “With over 20% of Americans trying to live on $20,000 per year or less, the demand for mobile homes has never been higher — and the big winners are the owners of the mobile home parks in which those customers reside.”

An internet pile-on ensued, and as it did, the space became diverse and nuanced, with investors entering for many reasons.

Jefferson Lilly, a Wharton grad who started his career in technology and bought his first mobile-home park in 2007, says he pioneered the industry’s first podcast — “Mobile Home Park Investors” — eight years ago, principally as a networking opportunity.

“It gave us a way to really reach other investors,” Lilly said. “Starting almost with that very first episode, we had somebody who would email us or sometimes call and say, ‘Hey, I’ve heard your podcast. Sounds like you guys know what you’re doing. I’m a high-net-worth investor. I’d like to learn a little more about your funds.'”

Lilly said up to a half of the $40 million he’s raised to invest in mobile-home properties was directly influenced by his podcast. He is also the administrator for the Mobile Home Park Investors LinkedIn page, which claims 6,550 members.

Overall, Lilly has found that millennials are attracted to this form of investment because it’s entrepreneurial. And mobile-home-park investments are more accessible to a generation known for its lack of wealth, with just a few thousand dollars needed to get started, he said.

“Just the glory of doing something unsexy, that means you’re an independent thinker,” Lilly said. “You’re certainly not following the crowd if you’re in the mobile-home-park space, or certainly you weren’t if you were getting into it 10 years ago.”

The online hype around mobile-home-park investment has evolved apace with platforms like Instagram and YouTube, where influencers thrive. One of those is Brandon Turner, a self-described “niche famous” personality with an Instagram following of 250,000.

Next to videos of his mobile-home-park investments and snippets from his “BiggerPockets” podcast, his Instagram grid is filled with images of his family, his Hawaii house, his coffee brand, and real-estate investment how-tos and inspirational videos. Mobile-home-park investments are a way to be free of a 9-to-5 job, live your dream life, and make your money work for you, even far from your home, as his mantras go.

“He has had a pretty big impact in the space,” Andrew Keel, a mobile-home-park investor and podcast host said of Turner. “He’s a seasoned investor that also has this lifestyle — this millennial preferred lifestyle of freedom.”

The way the meme librarian Amanda Brennan sees it, this looks a lot like a passive-income craze, or the idea that with smart investment, one can work minimally while making their money work for them — a concept whose popularity has exploded during the pandemic. People are reassessing their relationship with money and jobs and just what they need to sustain themselves, she said.

Indeed, the nomadic, nature-bound, minimalist, and affordable aesthetic that has defined Americana since the days of westward expansion has been reinvented during the pandemic as the popularity of #vanlife and #tinyhomes grows among younger millennials and Generation Z on social media.

“It’s the idea of being surrounded by all of the things that you need to be happy,” Brennan said. “This ties into mobile homes because you can be more easily surrounded by these places in nature and have that access.”

As more middle-class millennials are priced out of owning homes in cities like Austin, Texas, mobile homes have even developed a cultural cache. That speaks to the social motivation behind investing in the space because passive income is all about financial freedom, she said.

Narus said the often-sugarcoated way investing is displayed on social media can leave out nagging realities that come with owning any real estate.

Finally, a business that fundamentally helps address the affordable-housing crisis is often associated with issues of poverty, so it is not without related hardships. Residents are often enduring traumatic experiences, and this affects the business as well.

“It makes me angry that the mobile-home space, affordable-housing space has been branded as an easy way, a passive way to make money,” Narus said, mostly because this kind of branding is pitched as a way to get rich off the backs of poor people, he added.

He’s adamant in his social-media posts that the parks are not just somewhere to park your money. It’s taken him the better part of a decade to get where he is and break the $100,000 income level.

Successful people in the industry have heart and are passionate about affordable housing, he said.

“What makes my blood boil is the fact that people think they can come in, think that it’s a passive investment and they’re going to make all this money and not have to do anything,” he said. “You’re basically glorifying being a slumlord” if all you do is collect the rent, he said.