Sea Limited Stock: Is Now A Good Time To Buy Or Sell? (NYSE:SE) 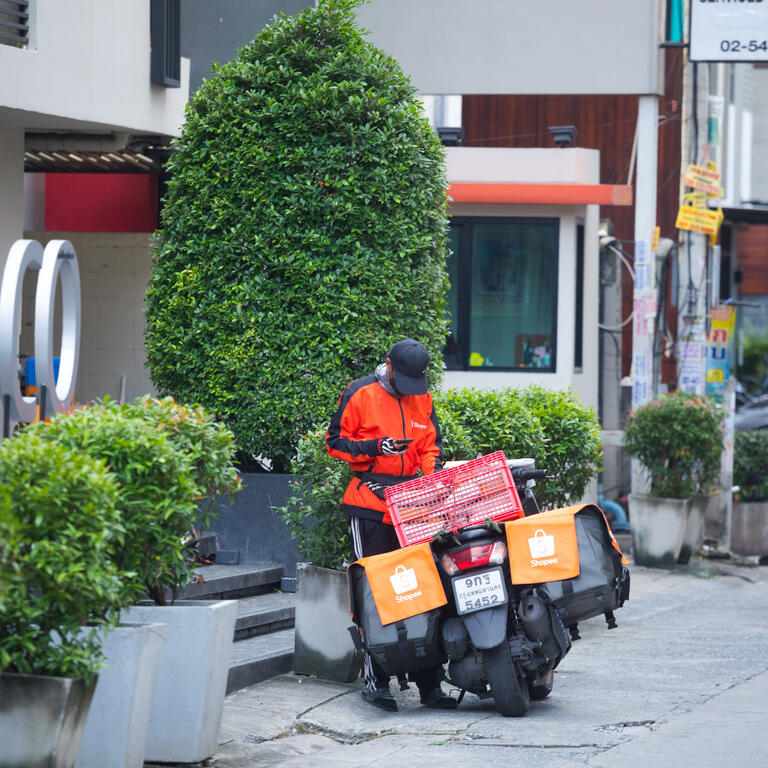 Sea Limited (SE) is a rapidly growing e-commerce operator in Southeast Asia. The company has directed healthy profits from its video game business to aggressively grow its e-commerce operations. The stock has crumbled amidst the tech selloff, leading many of my peers to pound the table on the name. I do a deep dive into the e-commerce business model and express my doubts regarding the ability to sustain solid margins in the long term. There are structural issues in the business model, and I question if take rate expansion will prove successful considering the company’s reliance on undercutting on price in the past. The stock might be buyable here, but investors should not underestimate the risk.

Like many high-growth tech stocks, SE has seen its stock drop more than 50% in just a matter of months.

SE is a very popular stock among retail investors and many are pounding the table here. Is it time to buy at around $175 per share?

Wall Street analysts seem to think so, with an average rating of 4.76 out of 5.0, good for a “very bullish” rating.

The average analyst price target is just over $383, suggesting more than 100% upside from current levels.

What Is The Forecast For SE Stock?

Consensus estimates call for the strong growth rates to continue moving forward, albeit with some sequential deceleration.

Potentially troubling, however, is that net losses are projected to widen over the next two years.

Is SE Stock A Good Stock To Hold?

Yet many investors are pointing to the 7x forward sales multiple and using it to call SE a strong buy. Let’s dig into why this isn’t so clear.

In the latest quarter, SE generated a blistering 122% growth in revenues. I note that “DE” refers to digital entertainment which is their video game division. “EC” refers to their e-commerce division, which is typically the reason why investors are buying the stock.

SE derives most of its digital entertainment revenues from their blockbuster game Free Fire.

The problem with sequential deceleration is that it suggests forward growth rates will be much slower than the past.

But let’s discuss the most critical business segment in e-commerce, which is their Shopee platform.

Shopee operates primarily in Indonesia, Taiwan, Vietnam, Thailand, the Philippines, Malaysia, Singapore, and more recently Brazil as of 2019, and in Mexico as of 2021. We can see all their markets below.

The fact that SE directs positive cash flows from its video game division to almost fully self-fund e-commerce losses is often cited as a reason to buy the stock. Yet we need to take a step back here.

I am a generalist investor who invests across the entire market based on wherever the most compelling investment opportunities exist. Currently, my coverage shows that high-growth tech offers the best risk-reward, so I am accustomed to buying tech stocks which are not currently profitable. However, let me explain the difference between the kind of stocks that I am buying versus what we see at SE. A typical tech stock might be unprofitable on a GAAP basis, but we can project solid profit margins over the long term due to the fact that gross margins are high (often 70+%) and would eventually lead to operating leverage. This is not the case at SE’s e-commerce division.

The problem is that SE’s primary strategy has been through undercutting existing competition. I will analyze one of their key markets in Taiwan, though a similar analysis could be done in all of their markets. As per the Shopee website, the commission fees range from 2% to 3% (and the fees are capped at a certain point). Taiwan has many other reputable and capable competitors, the most noteworthy being Momo (ironically, Momo gained market share in a similar manner as Shopee). As per the Momo website, their fees in general are 6%. I note that SE often has aggressive sales which involve coupon vouchers for both buyers and sellers, which means that their actual fees are much less than the stated fees. We can see how this cost dynamic shows up on the financial statements below:

As we can see above, the gross profit of the e-commerce segment has historically been negative and only turned positive in 2020 at 1.9%. I note that “e-commerce and other services” revenues do not include first-party sales as that is recorded under “sales of goods.” This means that the low gross margins are comparable to the typically high gross margins seen at other third-party e-commerce operators like Etsy (ETSY).

It is clear that SE’s rapid growth of recent years has been largely driven by an unsustainable pricing model – operating leverage cannot occur if gross margins are low, or even negative. In fact, the larger SE grows, the losses will only become greater unless it substantially increases its take rates. This is in stark contrast with its competitors – in this case, we can look at Momo, which has generated solid gross margins and solid net margins over the past few years:

SE bulls might argue that the company is aggressively investing in growth. Perhaps the thesis is that SE will take enough market share (it has usurped Momo as the market leader in Taiwan and owns about 50% of the market) and eventually can exert pricing power later. That’s an attractive thesis, but this is a good moment to note that many of SE’s investor base appear to be of people who are not so familiar with Shopee or the market dynamics in the markets it operates in. We can see below that among Shopee’s leading markets, the country sizes are quite small, many of which are comparable in size to Maryland or California.

Because these countries are small in size, as well as having higher population densities than the United States, this makes it substantially easier to offer fast shipping and in general offer a good e-commerce experience. Competing in these countries is much easier than competing against Amazon (AMZN) in the United States. In other words, the barriers to entry are very low for e-commerce operators – one should not assume that Shopee is operating at a huge advantage as compared to competitors.

Another issue is that the average order size was just under $10 as of the latest quarter. In comparison with Momo, which is more like the “Amazon of Taiwan,” Shopee is like an Etsy in that it connects smaller businesses with consumers. It is clear that a lot of its growth has been powered by aggressive sales tactics and through sales of smaller orders, which inherently will be difficult if not impossible to derive profits from, even with “scale.” Consider that the average adjusted EBITDA loss per order is $0.41, making up 4% of the average order size. In other words, even if SE raises its take rate by 400 basis points (which would make it higher than that of competitors), it still will be only breaking even on each order.

SE is utilizing the same aggressive tactics to invest in other markets, and in each of those markets, it is a foreign competitor entering an established e-commerce market. Sure, one could dream that SE will be able to dominate all of Southeast Asia e-commerce (and beyond), but the problem is that even if SE succeeds in taking market share, there is little reason to believe that margin expansion will take place, considering that low prices have been its primary selling point. I am comfortable making projections like saying ServiceNow (NOW) or DocuSign (DOCU) will produce strong profit margins over the long term in spite of minimal GAAP profits today. I have little confidence in saying that SE will produce solid margins from e-commerce.

Considering that SE has fallen more than 50% from highs, is the stock cheap enough? I assign a valuation of 15x EBITDA for the digital entertainment business, which is arguably aggressive considering the boom/bust cycles of video games. That leads to a valuation of $43 billion for digital entertainment, leaving $55 billion of value for the e-commerce and fintech segments. SE generated $210 million of gross profits from e-commerce in the latest quarter. $55 billion represents 65x annualized gross profits. That multiple is admittedly not so crazy and may present some upside as the market overlooks long-term issues. If the company succeeds in expanding take rates and sustaining market share, then I expect gross profits to expand very rapidly, providing strong shareholder returns.

The current strategy of sending video game profits towards the e-commerce division may have led to strong top-line growth in recent years, but what happens if the video game profits stagnate or decline? I am doubtful that SE can so quickly pull out of its cash-guzzling e-commerce markets, meaning that the risk can quickly become amplified here. Some investors may point out that the low take rate may suggest future upside, as the company can quickly increase e-commerce revenues and gross profits through take rate expansion. While this is true, it is unclear how take rate expansion will affect its ability to grow and retain market share, considering that its growth has come from undercutting on price, aggressive sales promotions, and its competitors are not to be underestimated. There is also the problem of the small order size, which inherently raises doubts about long-term profitability. While SE looks cheap enough here to expect a bounce, I caution against investing in this name with the mindset that this is a low-risk e-commerce operator. I note that its close comparable ETSY is trading at 15x gross profits with solid net margins. Amazon (AMZN) is also buyable here. While these two names may not be as sexy because they are closer to home (a good moment to ask why investors seem more eager to invest in businesses they have never used?), they appear to offer more obvious paths to long-term profits and shareholder returns. If SE can show sustained growth even after substantially improving its e-commerce gross margin profile, then the stock would have proven to be a strong buy from these levels. That unfortunately isn’t a bet I’m willing to make at this time. I rate shares a “hold” representing a neutral rating, as the stock can go either way, making the most profitable decision to stay on the sidelines.

A tidal wave of returns hits the e-commerce marketplace

Major Ideas for Investing in Penny Stocks in Oct

Oct 3, 2022 Sia
We use cookies on our website to give you the most relevant experience by remembering your preferences and repeat visits. By clicking “Accept All”, you consent to the use of ALL the cookies. However, you may visit "Cookie Settings" to provide a controlled consent.
Cookie SettingsAccept All
Manage consent